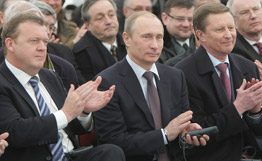 We members of the Independent International Human Rights Group, who joined our efforts to protect rights of Chechens and other peoples of the Northern Caucasus, as well as persons who suffered from crimes of the current Russian regime, are addressing to you in connection with the upcoming visit of Prime Minister Vladimir Putin.

We genuinely astonished and outraged that your country, known for its obedience to international law and long tradition of human rights priority, invited the person who is suspected, not without ground, in the heaviest crimes against humanity in the contemporary world. It seems that Danish authorities have no idea that such crimes were committed under the direct command of the above-mentioned person (we will mention the biggest crimes only):

Unmotivated aggression against Chechen Republic of Ichkeria, that declared independence in the legal and political context of the Soviet Union dissolution and confirmed its commitment before the whole world’s eyes with free and fair presidential election in 1997, when Aslan Maskhadov was elected. The aggression under Putin’s command turned into the war, the cruelest among contemporary armed conflicts, against the nation that counted hardly one million; in this war more than 250,000 Chechens were killed, including more than 40,000 children. Presently, the war continues despite propaganda about peace, normalization and reconstruction there. In reality, Russian occupying forces imposed state terror replicating Stalin’s Great Terror, that, in turn, forces the Chechen youth to continue uneven resistance, in fact, war;

A consequence of explosions of apartment buildings in Moscow and other Russian cities, that took almost 300 lives. Alexander Litvinenko, former KGB-FSB (Russian security services) operative, well-familiar with the facts from within, revealed (in his book “Blown-Up Russia: Terror from Within,” New York, Liberty Publishing House, 2001) that the explosions were staged by the FSB itself. In 2006, Litvinenko, who was granted Britain citizenship, was assassinated in London by the FSB agents with radioactive Polonium. Only the highest authorities could sanction use of Polonium, highly classified material. Putin was then President of the Russian Federation;

In Moscow theater, a group of Chechens, desperate by this endless brutal and strikingly unequal war, seized the viewers of “Nord Ost” production hostages, demanding negotiations with Aslan Maskhadov about ending the war in Chechnya. The world-renown Russian journalist Anna Politkovskaya found out later on that the FSB was accomplice, it cynically played on the despair of Chechens. Moreover, instead of negotiations the Russian leaders found no way out the standoff but poisoned the hostage-takers together with the hostages by a gas, whose formula wasn’t revealed even to doctors who came to help the hostages. At least almost 200 people including foreign citizens died because of the gas poisoning. Investigation was suspended on Putin’s order.

A group of Chechens and some other peoples of the North Caucasus seized a school in the city of Beslan (North Ossetia) with children and adults as hostages, again demanding negotiations to end the war. According to some eye-witnesses accounts, among the hostage-takers there were some people who had been previously kidnapped by law enforcement agents and “disappeared” without trace. These accounts can lead to assumption that this terror act also was, at least partly, staged by the FSB. But the Russian authorities committed even more terrible crime storming the school with fire-throwers, tanks and helicopters. Almost 300 people, including almost 200 children, were burnt alive during the storming. All efforts of Beslan residents to force the Russian top authorities to investigate the horrible incident in-depth are being brutally abrupt. Nobody could order to burn the school without Putin’s knowing.

Russia stopped gas supply in Ukraine and European Union in the midst of winter only because in Ukraine a mass uprising occurred that led to fair election of the leaders Putin and his men did not like.

Anna Politkovskaya, who held dual citizenship, RF and USA, and Alexander Litvinenko, British citizen, were assassinated. Putin repeatedly expressed his resentment for both.

We mentioned only the biggest and the most horrible crimes against humanity. Their level shows that they couldn’t be committed otherwise but with sanctions of President and Prime Minister. Putin held both positions, consequently.

If the Danish government aware about these crimes, thus how to explain such outright rejection of the international law? What benefit would have your country from such behavior?

Why Denmark during the darkest years of Hitler’s occupation showed the whole world the highest humanity saving its Jews, while now, being peaceful and free country, embarrasses itself by this invitation?

Nevertheless, we have a proposal for you, Mr. Prime Minister Rasmussen. We urge you to warn Mr. Putin seriously that if he will continue ignoring human rights anywhere, including North Caucasus, then he will be made persona non-grata, with ban entry EU countries, like President of Belarus, Lukashenka. Such approach would return Denmark its reputation as a brave and fair country, adherent to its humane traditions and the international law.